Hello everyone, thank you very much for participating in our 2021 Fall Festivities! We hope you enjoyed the event!

Here are some end of event stats you might be interested in!
In total, 3301 users watered 323132 and harvested 30897 plants for Gathering in the Grove!

We really enjoyed perusing all of the creativity submissions this event! From fresh new item combinations in the avatar contest, to glimpses into your world-hoppers lives in artwork or stories and fun real world crafts. We'd like to give a huge thank you to all participants for putting your creative efforts into our prompts and themes.

Here are the different winners we rolled or picked for each contest!

Here are our Staff Team's favourites! Click on each thumbnail to see the full submission.

Here are the outfits that won each voting thread! Click here to see full outfits.

This event type is one of three event types that we currently have. This is the first iteration of our brand new Gathering event type. We'll be making adjustments to each event type in order to improve them each year.

Here are some plans for improvements for future gathering type events that we've accumulated with the feedback from hosting this event!

Seasonal Quest & Content Plans
After a year of various seasonal events taking place, we'd like to provide some info on our planned event progression for the future.

Our next event will be a Winter Event some time in January! We'll be launching the second iteration of our Gifting event type! 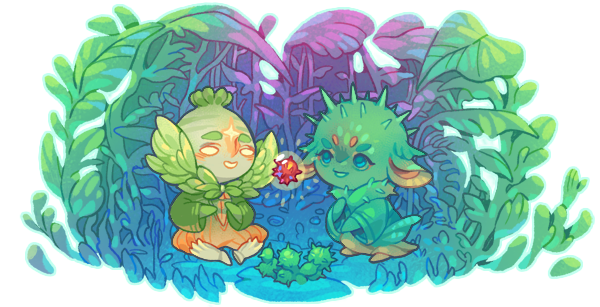 Daybreak in the Grove reveals a newly invigorated Cro, who
waves their carefully crafted map at you as you approach.
They must have stayed up all night copying the succulent
map, but don't seem tired from the work.

Nodding with understanding, Trout holds Cro tight while
the two say their goodbyes, and Cro's face lights up when
they turn to you. The little sprout thanks you for the
hope you've given them, before returning their gaze to
the parchment in their hand.