Hello everyone! Guilds can now officially be created! We've been working hard behind the scenes to prepare for it and we're so excited to finally be able to share this feature with the community. We're looking forward to all of the fun community niches that will be created here on Dappervolk in the form of Guilds. 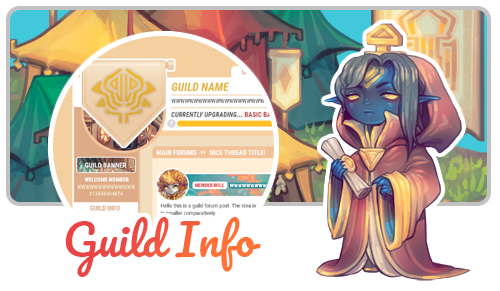 What are Guilds?
A Guild on Dappervolk is a player created community hub complete with a guild-only forum, live chat, leveling system, and upgrades to improve the Guild's perks. A Guild's community will work together and level the Guild as well as complete upgrades by doing various activities onsite.

How can I join a Guild?
You can look for a Guild to join in the Guild Subforum or via the Guild Directory! Some Guilds will opt to have open applications while others will be invite only. Each Guild has limited member space that will depend on the upgrades that they have completed.

How can I Create a Guild?
There are certain requirements that a Guild founder will need to meet in order to create a Guild. Once you meet the requirements, you can speak to the Guild Officiator at Peddler's Port to obtain a Guild license.

Essential Links
GUILD FORUMS • GUILD FAQ • GUILD DIRECTORY
The Guild FAQ is regularly being updated as questions are asked!
While the userbase gets settled into this new feature, we will be keeping a close eye on Guilds for bugs and issues that may only appear when hundreds of users start playing. Please bear with us as we tackle any bugs that arise! We are looking forward to all of the different guilds our community will be coming up with and customizing. We hope everyone has fun!

UPCOMING FEATURES, FIXES, & EVENTS
Lately things have been a bit quieter in terms of smaller news updates, as we've been quite busy behind the scenes working on the preparations for bigger updates! Below is a brief overview of some of the major upcoming things to look forward to that we've been working on recently. Each section will be covered in further detail in future updates!

Adventuring Optimization
Now that our Guilds feature is ready for release, we'll be focusing more development efforts on Adventuring optimization. Our current backend rework plans should reduce loading speed by a good deal as well as help out with CPU usage moderately. As a heads up, there will likely be up to a week of no site fixes being pushed to allow our coding developers to prepare the optimization in full before committing a live update.

Custom Creator Queue
This feature is next on our list of updates to put out, along with Adventuring Optimization. The two will likely be released together! We will make sure to give everyone a heads up before releasing this feature.

Fall Event
Our backend developer is also hard at work on new event types that will be different from the first major summer event that we had during August! However, due to the scale of effect that major events have on the entire site, we are not currently sure if we'll have time to fully implement and test a new major event type in time for a fall celebration. Nevertheless, we are actively planning festivities for the month of November regardless of whether or not the site is ready to host our next major event type!

Vaer Reef Quest Adjustments & Affection Quests
Currently, our writers have been working on adjustments to the Vaer Reef story quests and reworking the resulting Affection Milestone quests to better fit these changes. More info on this will be made available once all of the writing has been finalized and the adjustments are ready for implementation!

We'll be covering each upcoming feature or fix in further detail in future news or changelog updates! Thank you so much for supporting Dappervolk.