Hello everyone, we hope you’re having a great winter holidays month! We’re back again, this time to bring you all a new update on our development progress. We’ve got several sneak peeks to show you, as well as feature adjustments and Beta feedback implementations, and finally a solid launch time frame!

The Dappervolk community has been excitedly waiting for an update regarding Dappervolk’s official launch, especially because of our previously announced launch goal of late 2019. Unfortunately, a 2019 launch will not be feasible for our team for a variety of reasons.

Due to our core staff’s various life circumstances outside of Dappervolk, the scheduling and timing of progress has been unpredictable and difficult to estimate. Additional developers were hired on to provide extra workload support, but bringing on new staff always comes with an adjustment period consisting of training with potential roadblocks along the way. Because of this, progress was still not as smooth or timely as we had hoped in order to reach our previous loose timeframe estimate.

At this point in time however, after several months of development, we have been able to gauge our progress and take stock of the remaining work in a more concrete manner. We did our best with each team to create more specific and firmer estimates for each portion of work to be done, which allowed us to calculate a solid launch timeframe which is outlined in the Launch Timeframe section below!

Since our last update in September, the artwork side of development has been progressing very smoothly. Many of the assets that we've just recently completed are special things that we can't reveal yet—such as seasonal event items—but here are a few sneak peeks of some less-secret art assets that have recently been finalized! 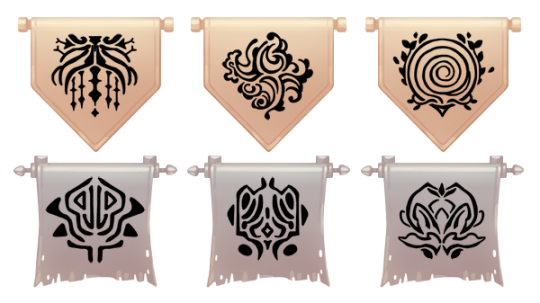 GUILD ASSETS
As you may have seen in one of our past art development streams, the variety of icons above are Guild emblems that players can choose to display on their Guild homepage. The majority of these emblems were concepted in-stream and then processed into finalized assets that will allow you to customize their outline, color, and flag shape to better fit your Guild's theme. As your guild progresses, you may even be able to unlock some special emblems and flags!

ADVENTURING ASSETS
Our pixel artist has been hard at work on our asset work-list for Adventuring. Below are some previews of the assets you'll see in-game in the future!

A few Active Mode obstacles that you'll need to jump over!

Remember the mysterious gate from the last update? Here are 3 more
gates, all in their before and after refinement stages!

AVATAR SETS
And finally, here’s a small sneak peek at just a few of the many new avatar items that will be available in-game at launch. Players will get a chance to uncover the details on what these items are and where they’re obtained when the game launches! 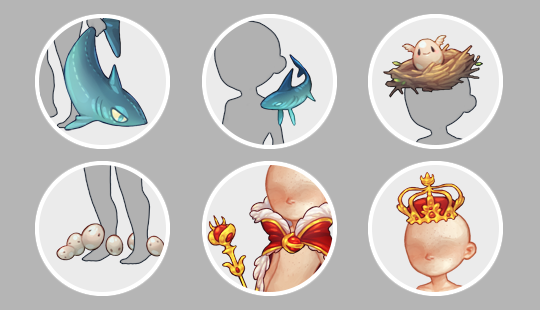 Some of these seem oddly...familiar.
As for the rest of the new items that we've added to the game thus far? They're staying under wraps to remain as in-game surprises—no spoilers here! We can't wait for players to be able to find and enjoy them all.

PET SYSTEM REFRESH
In order to breathe some much needed life into our pet system, we've coded in some new features and quality of life updates involving pet interactions!

PREMIUM FEATURES
During Beta testing, various premium features were tested by users and we received lots of great feedback on what people would like to see from them once Dappervolk launches. With all of this in mind, we've implemented several changes and additions to our premium features that we hope everyone will enjoy!

In addition to this, pet accessories will now display artist credits so that all copies of an artist's approved design will properly credit them for their artwork. This gets rid of the need for users to manually credit pet accessory artists in pet profiles, and should make it easier for everyone to remember who they got their designs from!

TEXT EDITOR UPGRADE
We have now switched to a new text editor with better functionality, which should make everyone’s lives easier in the forums. It will still use BBcode like the last one, but there should be less quirkiness with copy/paste, editing, and so on.

That’s all for the feature updates that we can announce right now, but stay tuned for our future dev updates as there are more feature refreshes and updates currently under wraps for testing!

After an extensive amount of discussion and scheduling with our coders, writers, artists, and testers, we were able to create solid estimates for each portion of closed development work that is left for each of our teams. In order to avoid unreasonable crunch times and rushed work, we have tallied up these schedule totals and added on a buffer for last minute testing—this final calculation has given us a solid timeframe for official launch.
We’re now aiming for a firm launch in May 2020!
The exact release date and time will be announced
at least a month prior to the month of May.
Closer to May, we will also begin marketing Dappervolk to reach beyond the current user pool and ensure a bustling launch!

Over the last few months, we've heard several requests from users in our community about having another Support Bundle sale as a final opportunity to support Dappervolk and get some sweet limited items prior to our official launch. Ask and you shall receive!

In the next few days, we will be releasing our final Support Bundle set for purchase—they will be available up until the 2nd week past our official launch date (exact date pending), after which they will be retired permanently. Full details will be posted shortly in a separate update, but for now here is a sneak peek of the bundle items that will be included!

As always, thank you for sticking with us all this time! Your support and feedback have been an immense help throughout our development process, all the way from the beginning of alpha testing to the Kickstarter, beta testing, and beyond! It has admittedly been a much longer journey than we had ever expected, but we are so grateful to have had all of you with us along the way—even through various unexpected delays that have set us back from our release goals. As such, we are incredibly excited to finally have a solid release month lined up according to the schedules of our coders, writers, artists, and testing teams!

If you’d like to follow our development progress more closely, Quisling will be updating the #status-and-faq channel in our Discord server every few days as assets are completed.